I said that to myself a week or so ago as I strapped my seat belt under my gargantuan almost-8-month pregnant belly, let out a tired moan, and replayed what I had said to him in the bathroom mirror that morning as he buttoned his work shirt.

I was in a bad mood. My knees hurt from a hike two days before that would usually not faze me. I was hungry already and I had just eaten breakfast. *Thanks, baby*

And to make matters a little bit worse, I was dealing with some “blended family” drama and the house was a wreck from the baby shower a few days before.

But he didn’t say anything. In fact, after my jerk-wife attitude he just gave me a warm hug and kissed my forehead and told me to have a good day.

And that made me feel even worse. The forehead kiss.

But I remembered back to when my Dad was alive and he would always give little tid-bits of wisdom that stuck with me. One thing in particular that stuck out was when he told me that a good marriage is like two hands. When one forms a fist and strikes, the other hand, instead of forming another fist to strike back, simply opens wide and embraces the other, holding it steady until it softens. He used this analogy several times, and I saw it in the way he treated my mother.

And how true it is. I think in a marriage there will rarely be a time where both sides are completely at a hundred percent. There will always be a little extra lifting by one side, a little extra tickling the smile out of someone, a little extra bounce from one or the other to sustain the joy. And that’s the beauty of it–that even when we’re being giant jerks with a little black rain cloud over head, we have hopefully married someone who gives us the benefit of the doubt and sees us as sunshine.

Since we’ve been married I can’t count how many times he’s lifted me.

But then again, he always tells me he’s keeping track of the opposite.

I guess that’s what marriage is–not always fitting the bill, yet loving each other through it, and making the jagged edges fit. And boy–I can be JAGGED.

“A good marriage is the union of two good forgivers.”

I mean, sure we can list all the things that are parts of a good marriage: Date nights, affection and intimacy, communication, light hearted fun, understanding, and passion. There’s a million things we can check off a list, but if our partner isn’t a forgiver–we’re done for.

My husband is a good forgiver. 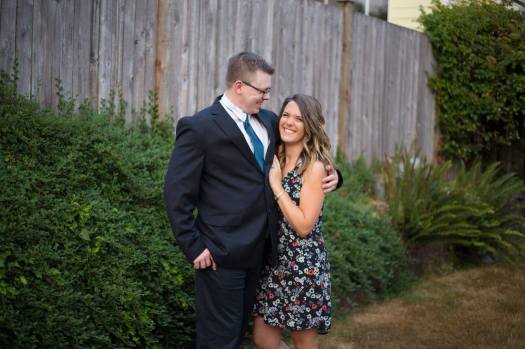 I’m trying to be one too.

That’s what makes the ugly, beautiful.

I have been more vulnerable with my husband than I’ve ever been with anyone else, exes included. He’s seen all the dark corners of me.

I’ve eaten milkshakes in bed with a gigantic stomach and bloated ankles and he’s rubbed lotion on my expanding skin to prevent stretch marks when I literally can’t reach certain places anymore. He’s heard me snore, he’s watched me cry so hard my mascara runs down my neck. He’s seen me throw up on the side of the road and he’s seen me covered in child’s vomit. He’s heard me say horrible things about myself and he’s listened to my self-doubt. He’s seen me embarrassed. He’s watched me grieve at a grave. He has listened to me go on and on about my work day and he’s accepted apologies that he didn’t have to accept. He has felt over all my jagged edges and has put up with me when I’m nothing but crankiness on two legs–and yet here he still is–a forgiver.

Do the kisses matter? Yes. Does the quality time? Certainly. Do you try and try to be kind and loving and generous and good parents together? Every day.

But do you forgive?

That’s what we should ask ourselves more often.

Do you take the broken pieces and realize not all of them will be put back in place? Do you realize that some callouses will remain rough, some scars will remain seen, some things won’t change–but you decide anyway to love him or her anyway? 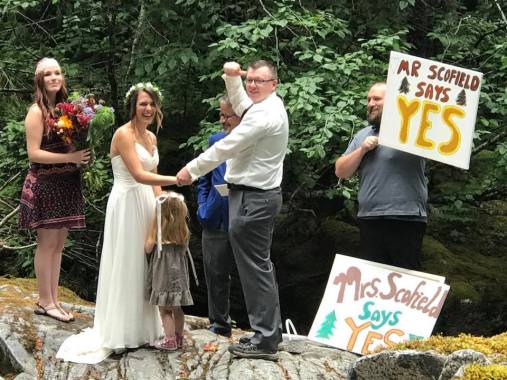 My feet are tired today in my heels and I know without a doubt I’ll most likely be asking my hard-working husband to rub them tonight before we pass out after putting a kiddo to bed and getting through maybe an episode of ER. And I know I’ll ask more of him and say more things I regret while he gets ready in the morning some day and I’ll forget to rinse out my cereal bowl before putting it in the dishwasher (a pet peeve of his). I know I won’t be the perfect wife and I’ll most likely fall far from a great wife at times too. But I’ll forgive myself and try a little better every day.

And I guess, when it comes down to it–that’s the ingredient that keeps us moving forward. That’s a successful marriage.

That’s how you keep earning your marriage year after year.

And every single forehead kiss you simply don’t deserve.

3 thoughts on “My husband married a jerk.”