Probably because no matter how far you come or how things change, you tend to remember.

This last weekend was our baby shower. Our house was filled to overflowing with over fifty family and friends who came to celebrate our baby boy with gifts, food, decorations, laughter, and lots of hugs. My sister, with a chubby baby on her hips, joined forces with some wonderful friends to put on a party that belongs in a magazine.

I was overwhelmed the entire day with the amount of people who came to support us and to give a nod to the past 6 years that I spent trying for a baby to no avail. Everyone knows my story–and it made the day a little more special. But that morning when I awoke, I was in tears. Because just as real as that baby shower was, so was the memory of when there was no baby to celebrate. And a part of my heart felt heavy for it.

Just as real as his little movements are right now was the moment when I opened my eyes in the recovery room after my last surgery, blinking against a harsh light and hearing my doctor tell me it was more invasive than he thought it would be. The endometriosis had spread to my spine, my liver, my kidneys–my ovaries. He thought he got it all, though. Maybe it would be my last motherless Mother’s Day.

But it wasn’t. I had a few more years to go.

I have mourned a child that doesn’t come. I have cried for a baby that isn’t there. 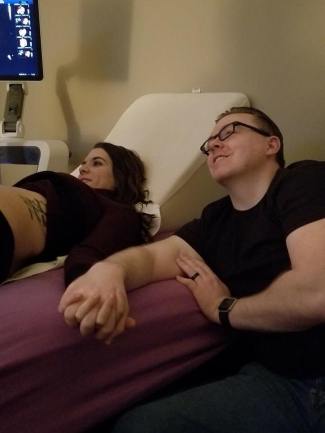 Just as real as my little boy right now at 7 months along who hiccups and bumps and rolls inside me, is the memory of all those Mother’s Day dinners and family get together’s where pregnancies are announced, moms are celebrated, stories are shared, flowers are wrapped, and I force a smile and count down the hours until the day is finally over. I remember each and every Mother’s Day. Oddly enough, I can recount every single year.

And God has counted the tears.

Because I remember it and because this year I’ll remember those times too and feel a pang for those years and those still entrenched in them–I wanted to celebrate you this year. The childless mother. The one who dreads Mother’s Day.

There are so many women–about 1 in every 8 women to be exact–who can’t claim the role of “mother” but who still fill the role. That 1 in 8 may be an aunt or a teacher or a mentor. That 1 in 8 may have fur babies to love and care for or a team of employees to look after. That 1 in 8 may be a role model to a teenager or a friend to someone who is motherless. And chances are, that 1 in 8 has no idea the space they fill.

We tend to glorify those who give birth while forgetting those who nurture, love, play, and step up to the plate for kids who aren’t their own. We tend to celebrate a group of mothers while ostracizing the other groups. And for that, I wish there was a change. Even now, as a biological mom, I too wish the stigma wasn’t there. Because just as much as I have devoted my life to River–so I have loved my step-daughter. So I have loved my nieces. So I have given myself entirely to those who need me. Before the two blue lines, I was still a mother.

This isn’t my first Mother’s Day.

And it isn’t yours either.

You and I can’t describe it, really. The burning in your chest when people tell you to “just relax, and it will happen” or even worse–“at least you know you CAN have children” when you open up about your miscarriages.

You can’t describe what it feels like to watch your husband celebrate his mother, but forget you. Not because he doesn’t love you–but because you don’t have children yet. You can’t describe the embarrassment of everyone pitying your empty womb, or even worse–not realizing that your heart is even emptier, and leaving you to dwell on it alone.

It’s a pain that far surpasses the surgeries, the needles, the treatments, the cramps, the dreams of babies that wake you up and remind you that’s not real life.

I still lay on my back in bed and feel the scars on my swollen stomach from prior surgeries. With each scar I remember the times I would swear to myself I wouldn’t care anymore, I’d stop after this next test, I’d let go. But I never did. Because being a mom was more important to me than breathing.

Even now, the scars remind me not to forget.

I don’t want to forget.

I’m not part of the club–I still feel like an outsider with those who hold their kids and never had to fight for that privilege. I still don’t feel like I know what I’m talking about when I’m in a room full of mothers who have two or three kiddos tucked under their arms and I’m still navigating how to feel about finally being blessed with one who somehow came into existence with an accumulation of tears, tests, hormone therapies, and hugs from my husband.

I still dread Mother’s Day simply because I remember those years. And I remember you, mama. The one without a child– but the one who holds the desire close. I’ll be celebrating you on Sunday and hoping that your family dinner isn’t too painful and that the time you spend crying is outweighed by some time you spend laughing and distracted. I’ll be thinking of you–the one out there who sits in the room designated as a nursery–and I hope that even if it’s just for a moment, you’re given a reason to look forward with hope and paint the walls in your mind with pink or blue, a hint of something great to come.

I hope your dread turns to peace and that the day doesn’t feel too long.

I hope you get flowers. Or sunshine. Or a hug that revives you.

He moves now inside my belly and sometimes it surprises me enough to jump a little and smile at how strong he’s getting. I touch my belly and feel the scars and it’s enough to humble me, to take me back to the operating table, to remind me of the night in the bath tub when my husband held my hand as I cried and told me I’ll always have the heart of a mother, no matter what my body allows. My baby reminds me to not forget where I came from when Mother’s Day felt empty and my heart felt emptier. He reminds me to cherish my many roles as mother–as a bonus mama, as a biological one. As a teacher, a friend, a “mama hen” among co-workers or family. My baby River reminds me to be thankful.

This Mother’s Day I hope that for you too. That somewhere inside you, you’ll be reminded how blessed you are to have the heart of a mama.

That’s enough to celebrate until your cup is even fuller.

And in 1 in 8 solidarity, I’ll celebrate that for you.

One thought on “To the one who dreads Mother’s Day”