Just two days ago I woke up to the news that the president and prophet of the Church of Jesus Christ of Latter-day Saints had died at the age of 90.

Still lying in bed I scrolled through the articles and the stories to seek more information, saddened by the news. And then I stumbled across this article posted in the New York Times.    (https://www.nytimes.com/2018/01/03/obituaries/thomas-monson-dies.html)

I was appalled by the words that spoke of him as a bigot, a misogynistic and integral part of exclusion and hate and sexism. I read the entire article and shook my head through the whole thing.

The writer of the article was clearly either one of two people. Someone who had been part of the church and left it, or someone who didn’t understand the church and had bad feelings and resentments stored up against it. I obviously understand both sides–but even now, I have a different view. A more truthful view, to be honest.

I use my blog to share my story, to reach out to those who are going through similar things–and frankly, to just connect with people. I’ve shared my feelings about the LDS church, the ways I’ve been hurt, and the reasons I’ve left. But after reading that article as well as various other posts that said goodbye to Thomas S. Monson in a not-so-respectful way, I wanted to add my voice. Not as the ex-Mormon who agrees with lots of negative sentiments–but as a former church member who knew and loved President Monson. And as a former church member who still loves him–and salutes his legacy.

President Thomas S. Monson was appointed as the 16th prophet of the church just four months before I became a member. He was the only prophet I knew. So naturally, out of everyone in church leadership, I tended to cling to him the most.

And I’m glad I did. From the get go, President Monson’s stories, advice, words, and admonitions were the soundtrack to a decade of my life. I hung his quotes on my dorm walls at BYU. I attended weekly services and devotionals where I would feverishly take notes. I would dogpile pillows and blankets and pizza boxes into our small apartment living room with my room mates and watch General Conference every six months–glued to the TV when President Monson would take to the pulpit to speak about loving one another, serving one another, and taking the time to just make sure that those around us are taken care of.

I can’t remember how many times I would be awake at night through the years, tears in my eyes after a break-up or a horrible day at class, mourning over the last breath that my dad took, aching after my divorce, lonely after the loss of a friend–and his words would come to mind and gently remind me the night doesn’t last forever.

After my Dad died on December 9th of 2013 I remembered his words during a past devotional: “God gave us memories to give us June roses in the middle of our Decembers”. So I began to think of the moments with my Dad that were warm, happy, filled with laughter–and June entered my thoughts. And sleep came.

Even months after my divorce I remember my now-husband Jeff unknowingly posting a quote by Thomas S. Monson on his Facebook wall: He reached well past the bounds of Mormonism and touched people of all walks of life. All cultures. All beliefs. He traveled the world and met with leaders, queens, presidents–and also children, village people, and those who were struggling. He was always smiling, always finding new ways for the church to evolve and become kinder, always taking his time with his words to let us know that although doctrine and rules and deep lessons were valued in the church–he would rather take the time to speak of the principles that mean the most. Grace. Selflessness. Love. Giving. Acceptance.

I’ll never forget the stories he told of the widows he would visit and the time he showed up at an airport in slippers because he had given his last pair of shoes to someone who needed them. 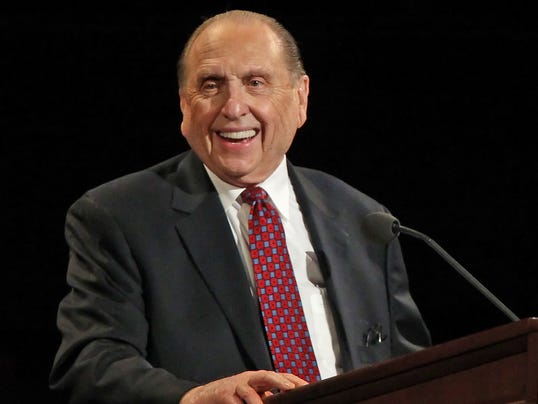 I wish the New York times reported on that.

I wish they knew about the time he stopped mid-step after General Conference and waved at me with a sweet smile after I pushed through the people to get to the front of the stage after the last song. I wish they knew about how he looked up at Heaven at his wife’s funeral and watched the clouds for a moment–missing his soul mate, but confident he’d see her again.

I wish they knew how he had someone behind the pulpit holding him up into place so he could give one final talk at General Conference toward the end of his life–obviously in pain, but determined to say what he had to say:

“Let us examine our lives and determine to follow the Savior’s example by being kind, loving, and charitable. As we do so, we will be in a better position to call down the powers of heaven for ourselves, for our families, and for our fellow travelers in this sometimes difficult journey back to our heavenly home.”

Things have changed for me since those years of being at BYU and marrying in the temple and attending every devotional. Things have changed a lot. My beliefs obviously don’t still line up with his to a tee, But I will never doubt for a second that I have been shaped and molded by so many amazing principles and even more amazing people who taught me how to shine light and how to think outside of myself–and how to live a life in awareness of those around me.

President Thomas S. Monson is one of those people for me.

Regardless of what the Times eulogizes and regardless of the hoards of anti-Mormon groups who will be talking about the negatives of the church during this time–I wanted to add my voice, as soft as it may sound within the crowds, to say thank you President Monson.

Thank you for teaching me grace.

Thank you for being an example of kindness.

Thank you for reaching a teenage heart in a college dorm as well as a woman’s heart further down the line. Thank you for reminding us to do good. To love well. And to follow the Savior.

Those principles I haven’t forgotten, and those lessons I’ll share.

Until we meet again. 6 thoughts on “A goodbye to Thomas S. Monson: From a former Mormon”